I was looking for a simple retrofit kit to turn my existing commuter (pic below) into something that can get me up a couple of tough hills a little easier.

I did not want a ton of power and weight, and I wanted to preserve the looks of the bike as much as possible, so the 250w, one-cable kit from Elecycles seemed like a good option for me. I opted for the 36v 7ah battery. 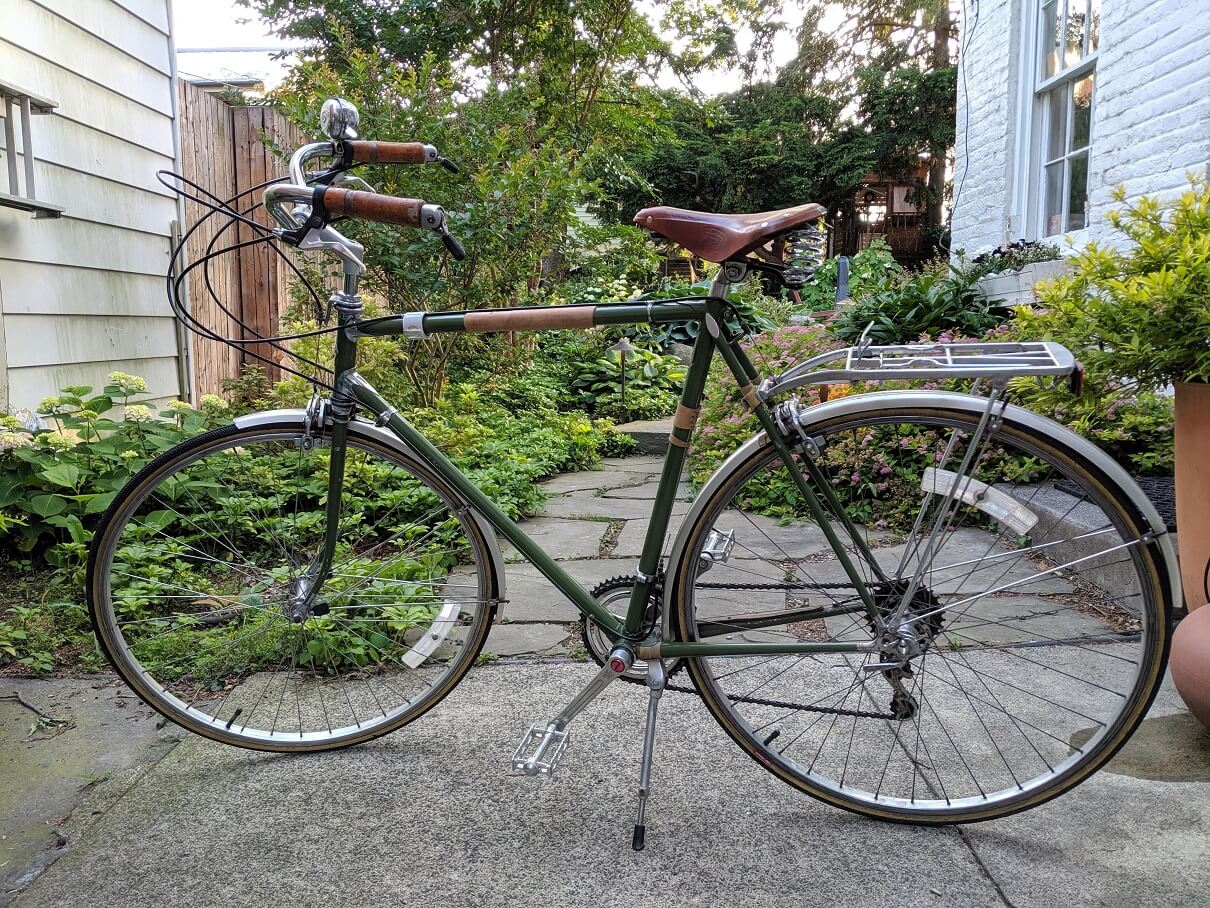 I did not want a ton of power and weight, and I wanted to preserve the looks of the bike as much as possible, so the 250w, one-cable kit from Elecycles seemed like a good option for me. I opted for the 36v 7ah battery. First issue I ran into is that my bike uses 27" rims, and Elecycles did not offer that size. I opted for a 700c rim as being close enough for testing.

Components arrived in two packages: wheel, charger, tools, instructions, bottle battery cage controller in one, bottle battery and wireless display in the other. I received the first package only a few weeks after ordering and the battery 10 days after. 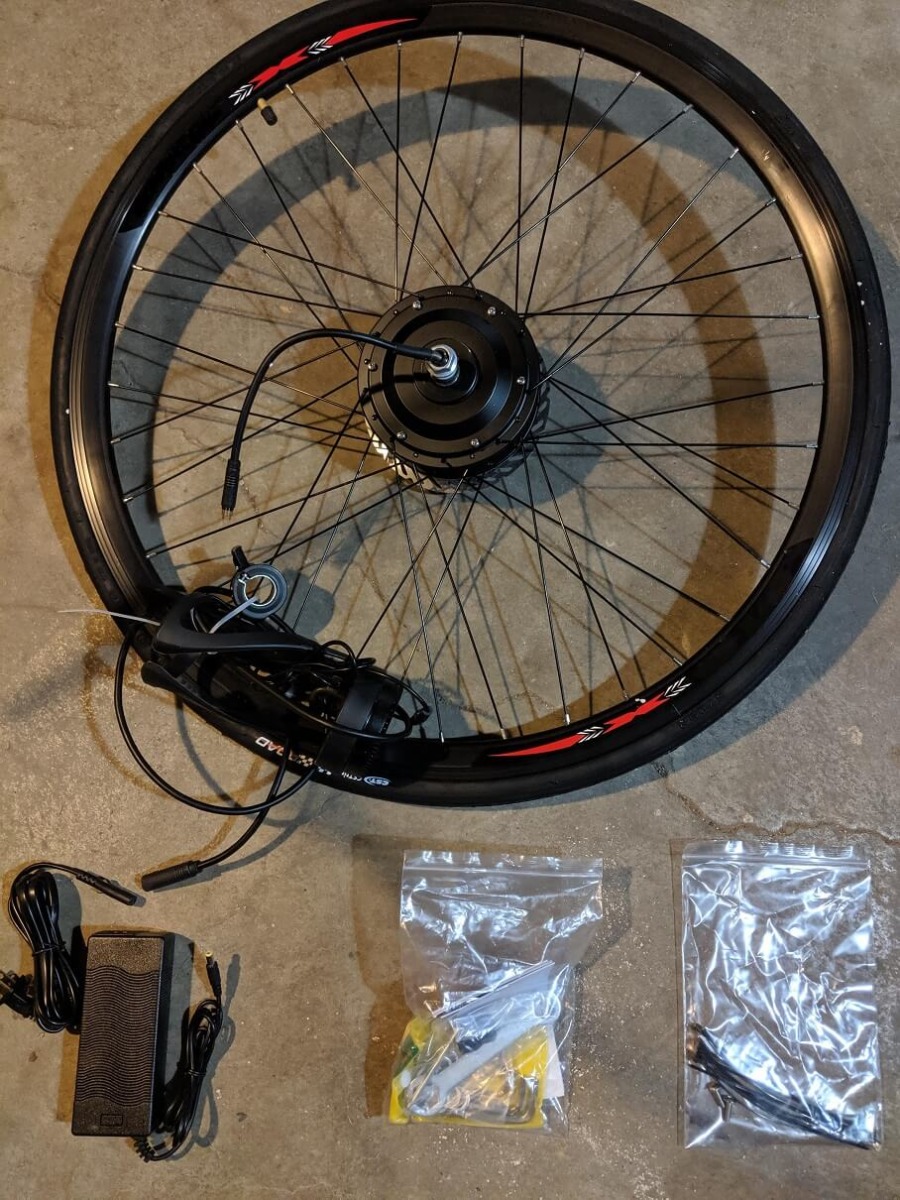 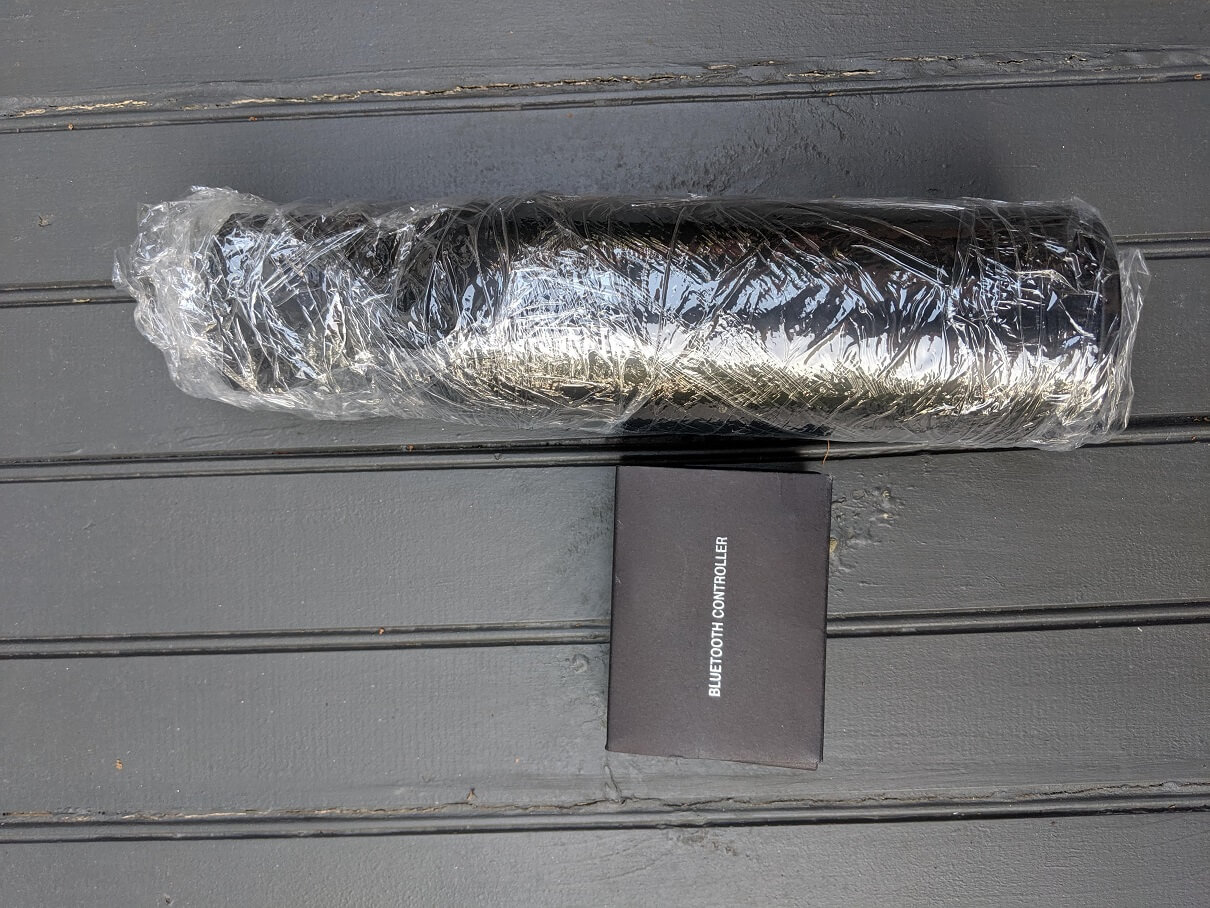 The battery is fairly small, just as I was hoping. Of course, it also provides very low power, but it's enough for my commute. 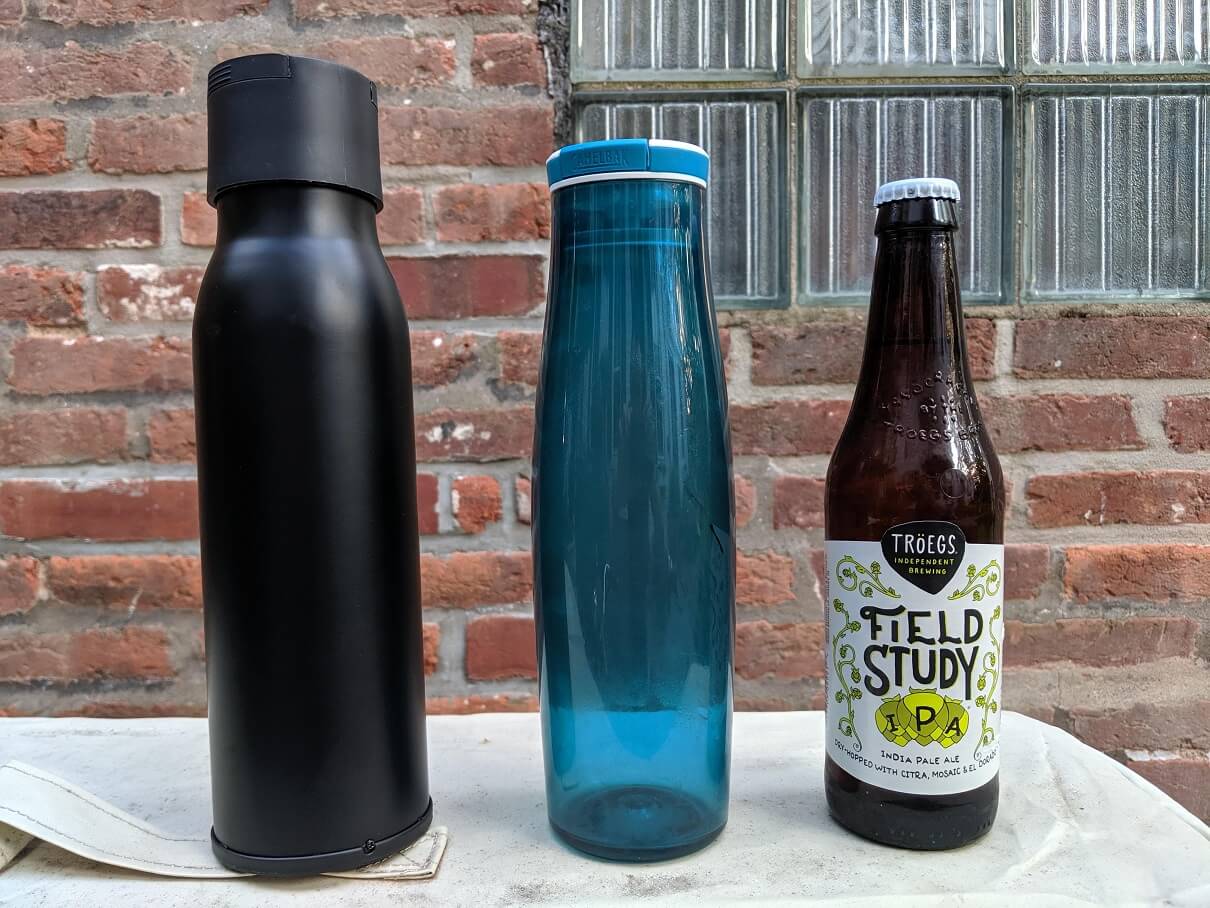 Assembly was easy enough, but the manual that came with the kit was entirely in Chinese. Fortunately, their fairly responsive customer service sent me a link for the PDF version of the main instruction sheet. The English was read like a Google translation, but there are so few steps that it was easy to follow along. 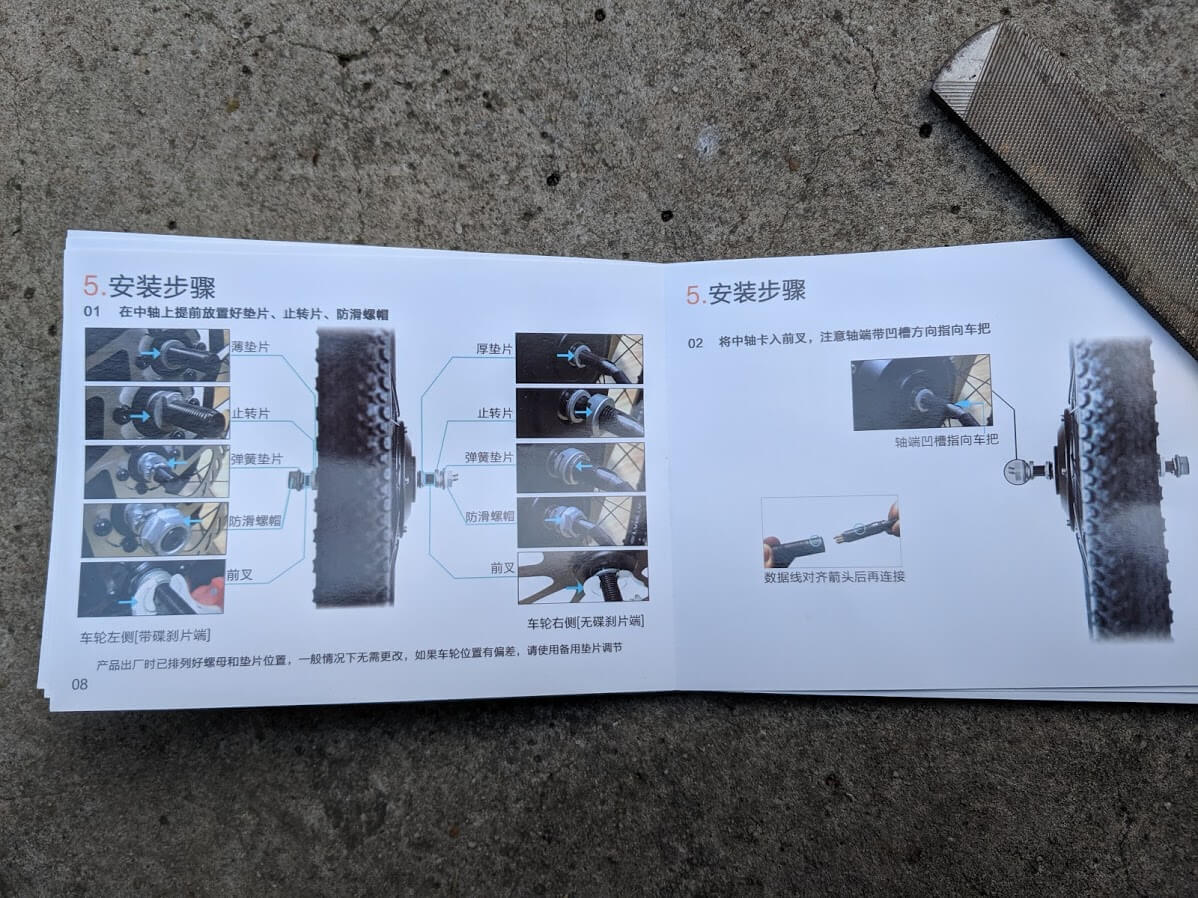 I had a couple of minor issues to deal with during installation: my frame does not have a bottle mount, so I bought a strap on cage mount that's surprisingly strong and handles the battery weight (approx 2 lbs) quite well. I thought about using riv-nuts bosses, but I am a little hesitant because my frame is CroMo double butted and I don't know how delicate it is in the middle of the down tube. The second hiccup was that the fork ends had to be filed slightly (0.5mm or so). No biggie.

The "one cable" moniker for this kit applies only if you don't use the included throttle, otherwise you are dealing with two cables. As typical, the motor cable is fairly thick and hard to hide on the frame. That's not a surprise, but I thought I'd be able to conceal it better than I did. I might consider moving this kit to a black or dark frame. I chose to run the cable along the fender rather than the fork just to test the maneuverability and the look. 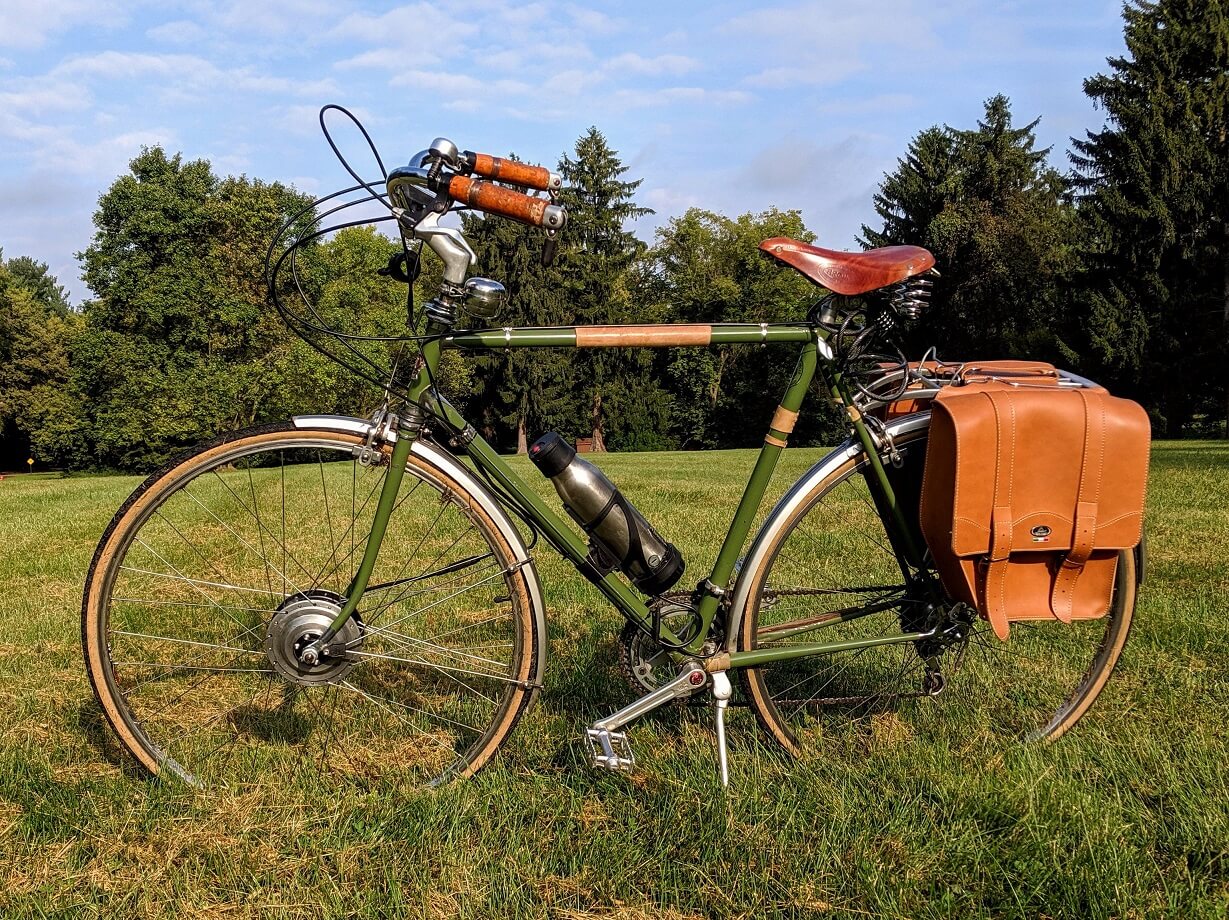 I first connected to the controller with the WePower bluetooth app for which they provide a link. The app is adequate and better than I expected, in fact. Seems like there's no way to switch it from metric, but that's fine for me.

I then also tried the bluetooth wireless display that I purchased as an add-on. It was only $16 so I thought I'd give it a try, but for the way I ride, I don't think I'll need it. The benefit of this gadget would be for riders who want to tweak power output on the fly during their ride without using the phone. I don't want to use my phone, but I also don't need to change the power setting. I'm more of a set it and forget it rider :) In any case, connection was easy and it was nice to see the percentage of battery charge available.

Regarding the battery, DO pay attention to the warning to first plug in the DC end of the charger to the battery, and then the AC end to the outlet. I did not and was rewarded with a pretty big spark!

Took the bike around the block just to familiarize myself with the electric motor and see if the bike felt weird with the 700c tire in the front and the 27 in the back.

The handling and feel of the bike definitely changed with the extra 9lbs of battery and motor. This went from a 24lbs frame to a 33lbs and weight distribution shifted forward. However, it should work well enough for my type of riding which is mostly commuting in an urban and suburban environment and quick errands around town. Normally, I'd say I bike at a fairly leisurely pace of 8-12 mph, one of the reasons I moved from drops to raised swept back handle bars. I'm a smell the roses biker.

Once I activated the battery (press the red button on top), the power in " Commuter Mode " made itself fairly obvious and seemed like too much assist for my liking. I switched to manual and eventually settled on 30% power. The app also had a setting called " Leisure " and one called. The app is in English but offer no explanation about the settings. From my experimenting it seems that commuter offers the most assist, leisure is mid level, and exercise is least. Both Leisure and Commuter offered too much pedal assistance for my taste. The app has an additional mode where it offers assistance only on the uphills (you choose the incline angle that trigger the motor, and the level of power). I have not fully tested this mode but it might be a good option for me.

My commute to work is approximately 4.5 miles and has an elevation change of 200 feet. It normally takes me 25 mins on the way to work and 30 on the way back due to more aggressive grades on the route home. One of the hills I encounter is very short but has a very steep section near the top that usually has me in my lowest gear and occasionally standing for the last 20 feet or so.

Since I'm still considering the option of moving the Eekit to a single speed frame (Fuji Feather), I wanted to try biking the commute without shifting, so I set the gear on the 3rd gear and turned on the motor. It quickly became evident that 20-30% power in manual mode was the perfect amount of support for me. Anything more and the pedaling effort became too light and "unnatural". I was able to offset the extra 9lbs of weight on the flats and on the uphills the motor really kicked in and took me to the top with very little effort. On my commute I also had saddle bags with probably an additional 5lbs of weigh. I'm 157lbs myself.

Best of all, battery consumption went down only to 97% when I got to work and 87% by the time I returned home (but that included several extra miles of biking and testing for the fun of it. Given the puny 36v 7ah capacity I feared having to recharge the battery every roundtrip, but that's definitely not going to be the case.


Since the kit came with a throttle I gave it a try. I thought it could be useful in getting a boost from stop signs and red lights, but it does not work from stand-still (maybe this is due to the low motor power, or maybe it's standar behavior on ebikes - I don't know). The throttle did work to speed up and ride moped-style once you got the wheel rolling through 1/2 a turn. For me, it turned out to be a pretty useless feature, I will probably not include it in the final assembly, which has the benefit of eliminating a cable.

My dislikes so far are that the motor makes a slight buzzing sound when it turns on. I have no frame of reference to know if it's louder or softer than other geared hubs. I just know I did not like it.

Also, the gyroscope worked pretty well to detect inclines, tilts, acceleration and braking. It made me comfortable that brake with power cut-off are not needed with a 250W motor when riding at sensible speeds.

Speaking of speed, of course I had to test how fast I could go in the relative safety of the parking lot --I got to 28mph with little effort on the higher power settings. In normal use I kept to about 12mph average, so not much more than my typical 9-10 on my somewhat hilly commute.

The motor was quite smooth in the programmed modes (Commute, Leisure) but in Manual, I did feel a certain jerkiness when the motor first engages and accelerates. This is not a rodeo situation, but it's definitely there, and I imagine the $3,000 setups with sophisticated PAS and controllers would make their higher quality evident on this point.

Overall, this kit worked better than I expected for my situation. It gives me all the power I need on the hard stretches while keeping my bike feeling very much like its old self at all other times (a good thing!). I also liked the very small and discrete bottle shaped battery. Other "bottle batteries" advertised look like more like torpedos (to avoid cruder analogies) than bottles although they do offer more power for those who need it. If you have a beloved bike you want to covert without destroying its looks and with minimal effort, this front wheel, one-cable kit might be just the ticket.

I like it enough that I will invest another $100 dollars or so in re-lacing the hub to a silver 27" rim to match my rear one, and this way I'll have a bike that can quickly convert from an electrified commuter to a 24lbs clasic lugged rider.