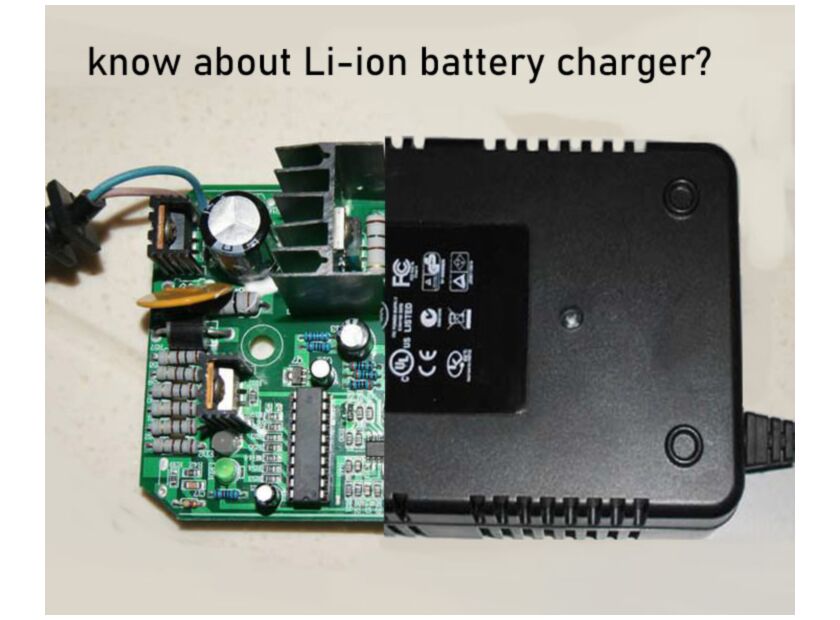 Here you could see three important parts about the Li-ion battery charger:

1. What is a Li-ion battery charger for an electric bike or electric scooter？

2. How to choose the Li-ion battery charger for your electric bike or electric scooter?

Mostly, the lithium battery charger comes together with the battery when you ordering a battery.

But sometimes you need a new or extra charger, the following factors could be considered to choose the right charger which will make your battery function as safely and efficiently as possible. 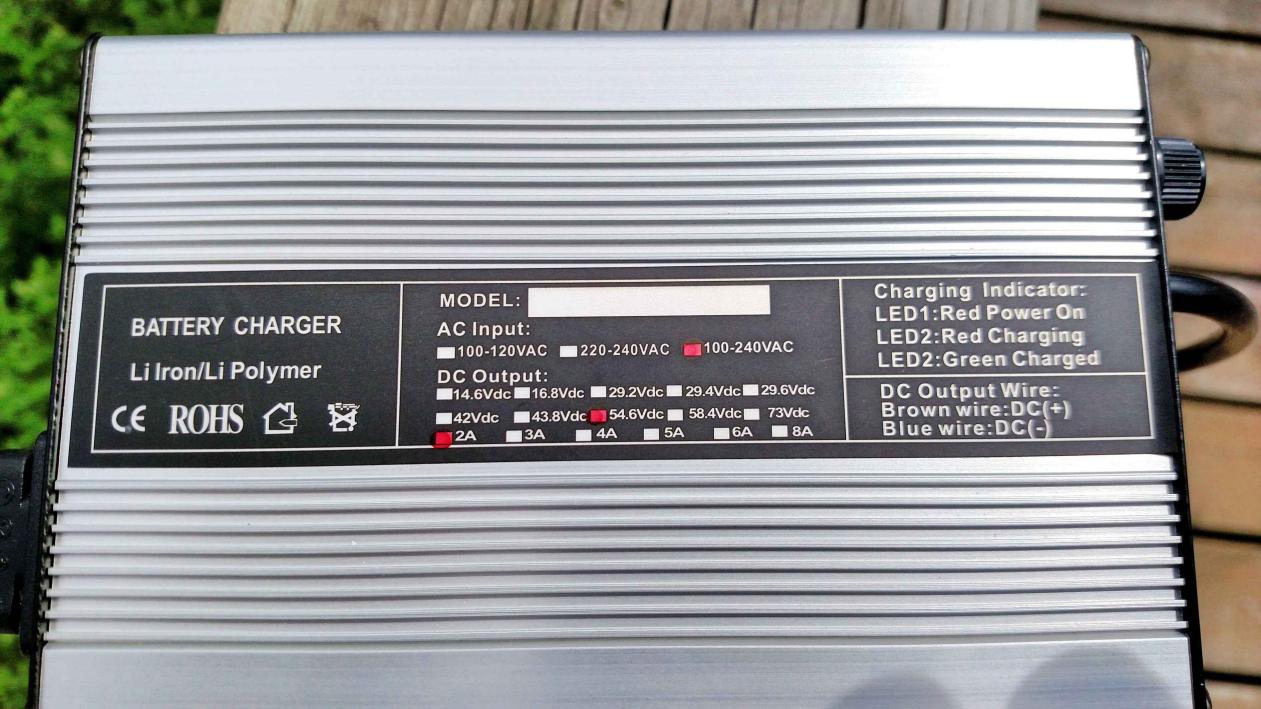 Sincere home electricity varies from country to country, such as 120V in the USA, 220V in China, EU, GB, etc. So when you pick up a lithium battery charger, you should ensure its input voltage is supported by your home electricity.

First, let's see about the output voltage, it should be compatible with your battery.

A basic charger usually charges at around 2 amps. But it takes too much time with a 2amps  charger especially for the larger lithium battery such as 30Ah or bigger. So there is a wide range of chargers with different charge rates on the market now- from 2 to 20 amps or higher. The higher the charger output current, the faster to get the battery full. But the higher current may harm your battery or even make a burning. So what output current of the charger could be choose?

Generally, we suggest that the charger with an output current of 0.5C-1C.

The “C” rate is the rate of charge (or discharge) as compared to the capacity of the battery.

if you use 3.5 Ah cells, and you have 4 in parallel (3.5Ah*4= 14Ah) , the output current of the charger has better to be less more than 7 A. Even 7 A is a pretty high charging rate for lithium batteries. The lower current you charge at, the happier your batteries will be and the longer they will last.

Most common Li-ion battery chargers for electric bicycles or scooters are found in the 2 A to 5 A range. These are all reasonable current levels for most batteries. But if you have a very small battery, such as a 5 Ah battery pack, a 5 A charger would be 1 C, which would be the limit of most cells. So always remember to keep that in mind when choosing your charging current.

Plug- connecting to your home electricity

See the picture below, the plugs may be different in different countries. So you should choose the right one which works with your home electricity socket, or you may need a transform adapter. 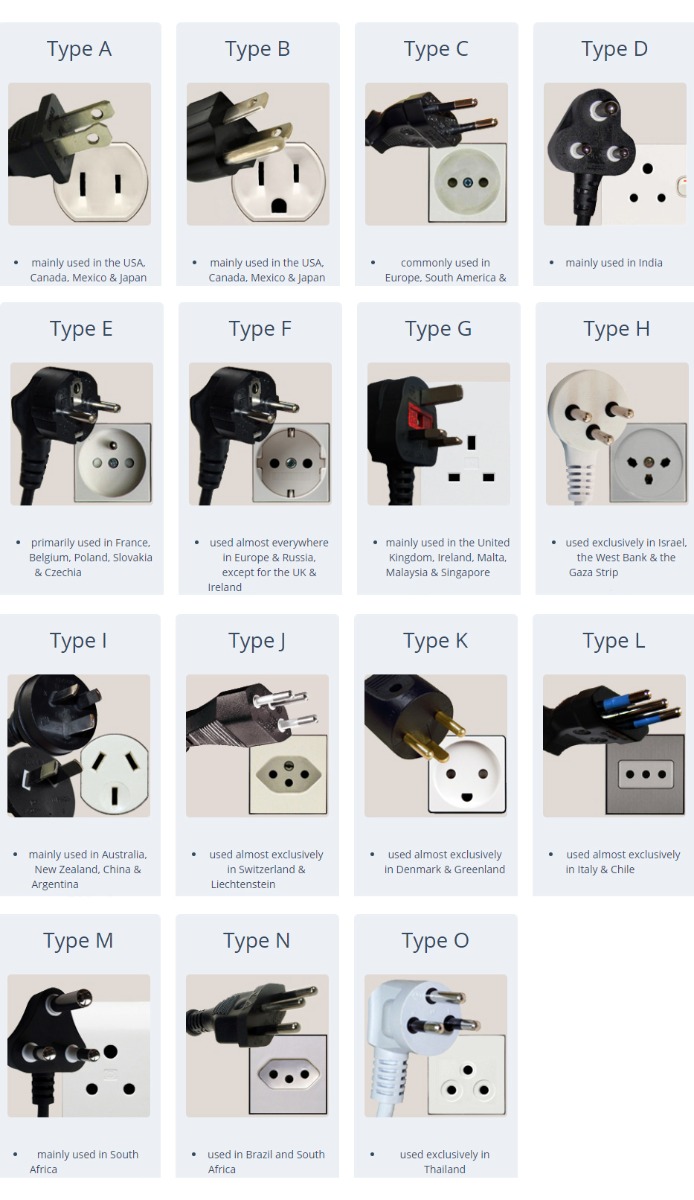 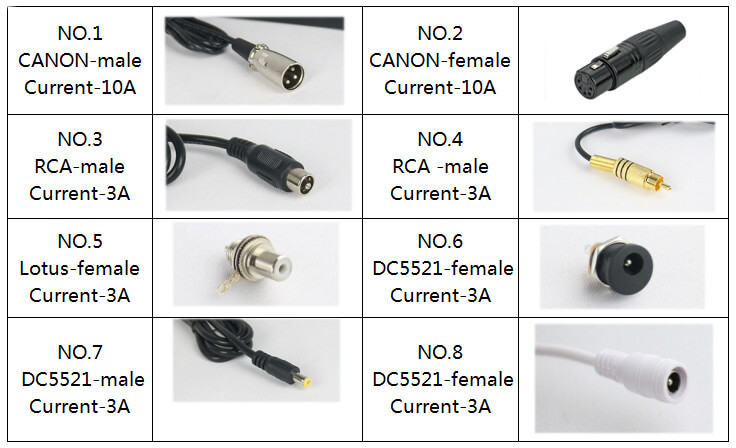 3. How does a Li-ion battery charger work?

During this stage, the voltage across the Li-ion battery cell increases for the constant current charge.  The battery will be charged to around 80% of its capacity at the fastest possible rate.

After a time the voltage peaks at around 4.2 Volts. At this point, the battery will enter a second stage of charging known as Constant voltage charge. The charging voltage is held constant in order to prevent damage by overcharging and keep the battery at a full charge, replenishes the remaining 20% of charge.

Maintaining a constant voltage gradually reduces the current until it reaches around 0.1 C, at which point charging is terminated.

It should be remembered that the charging process is not totally efficient -around 95% , some energy is lost as heat. 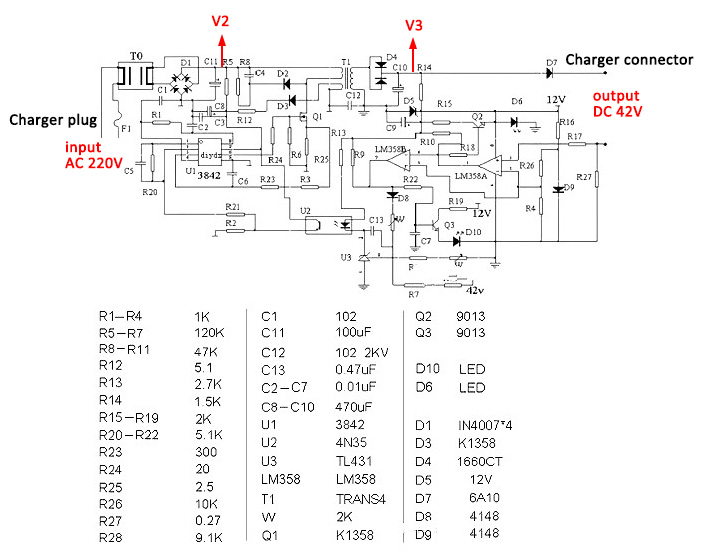 The main AC220V input(V1) could be first filtered by T0 bidirectional filter to suppress interference, after then it may be rectified by D1 full-wave rectifier and filtered by C11 capacity to get a DC 300V voltage(V2).

This V2 is then delivered to the T1 transformer. Through T1, we get two voltage, one is rectified by D4 rectifier and filtered by C10 to get a low and safe DC voltage V3, another one is powering the Q1- K1358 FET.